The Galloper Wind Farm team are celebrating winning a national accolade at the Energy Awards 2021 in recognition of their efforts during lockdown.  The Energy Awards, which took place in London recently, saw Galloper scoop the prestigious Lockdown Energy Champions of the year award,  despite tough competition from ten other nominees from across the energy sector.

RWE Renewables operates the windfarm on behalf of its partners, and the team have demonstrated commitment to performance and safety at the most challenging of times. Galloper is a 353MW wind farm, located 30km off the Suffolk coast. Each year the wind farm’s 56 Siemens Gamesa turbines generate enough green electricity to power the equivalent of more than 380,000 British homes.  The wind farm is operated and maintained from a state-of-the art, £10 million, Operations & Maintenance facility in Harwich.

During the pandemic Galloper not only continued to operate safely with highest performance since it started in March 2018 but also achieved an outstanding health & safety record.

The Galloper team achieved this despite numerous challenges including at times working on a reduced staffing level of up to 50%. The operations team also carried out a successful major component generator exchange on one of the turbines, which entailed detailed logistical planning with a reduced staff, a number of external contractors, and within tight covid protocols.

Commenting on the award win, Galloper General Manager Sean Chenery said:  “Our 60 strong on-site team includes Galloper and Siemens Gamesa employees.  They had only been established at our purpose-built,  Operations & Maintenance base in Harwich for a matter of months when the pandemic hit.   Like many businesses the team had to completely re-evaluate how we worked to not only ‘keep the lights on’ but also do everything feasibly possible to ensure the health and safety of our team and contractors.

He added:  “During this time our interim Operations & Maintenance base manager Kieron Drew, who accepted the award on the teams behalf, utilised his previous and current military experience to support the project to implement numerous new working practices and health and safety measures.”

recognition of exceptional environmental performance. The ISO 14001:2015 is an internationally recognised Environment Management System, that when achieved, highlights continuous improvement and reduced environmental impact.  The project also gained the Silver Award for supporting the Armed Forces community in the work force.

During the pandemic, despite working full time, Keiron Drew also continued to serve as an Army Reservist with soldiers of his squadron serving on Op RESCRIPT providing Military Aid to the Civil Authority. Members of his squadron were responsible for providing critical logistical support to covid testing centres and the NHS, delivering PPE and establishing vital welfare and infrastructure for the numerous covid facilities.

With many of the Galloper team living locally to the Operations & Maintenance base, they continued to  support local pupils and schools by delivering STEM and careers presentations. Keen to ensure pupils did not miss out on this opportunity due to the crisis, the project created a virtual presentation, narrated by Kieron, which could be delivered safely.

The estimated average annual generation at Galloper is the equivalent to the approximate domestic needs of more than 380,000 average UK households.1 RWE Renewables has led the development and construction of Galloper Offshore Wind Farm and its ongoing operation on behalf of the project partners. 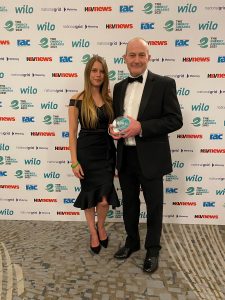 Subscribe to our quarterly newsletter to receive our latest news. No Spam.

You have successfully signed up to our newsletter.